Turning systems: What's on the market?

What does the market for specialised machinery for turning systems offer? Multispindle, single-spindle, CNC machines, transfer...
What are the main characteristics of the most commonly used machines? And what, above all, are their limitations.
Here is a brief overview that can help to focus on both the potential and the main problems of the sector.

Single-spindle machines (which can be operated as either a primary or secondary spindle) › This is the basic machine, the most widespread concept of the lathe, used today for the production of tens to a few hundreds of pieces, both from bar, for simple machining, and for secondary turning.
Limitations › The main limits of this type of machine are low productivity and limited flexibility, which also depend on the presence or absence of numerical control. In fact, these are problems common to all the machines involved in this type of processing. Single-spindle machines have been used in the past, and partly still are, in China, India and other developing countries, that is in economies characterized by a wide availability of low-cost labour, but unspecialized in precision work. To obtain large production volumes using such machines, you need a lot of them, each carrying out a single phase, or, in any case, a limited part of the entire processing cycle. However, there are various issues with this approach, as production system is divided into many distinct processes, and each intermediate process introduces new possibilities for errors and limits the effectiveness of a quality control that can guarantee the increasingly higher standards demanded by the market. Consideration must also be given to the extensive expenditure of space and labor involved in both production and quality control. Indeed, to satisfy the demand for large volumes of products using low-yield systems, producers in these countries have no choice but to equip themselves with a very large number of machines. For those who have had the opportunity to see some photos, the image is striking: hundreds of machines and hundreds of people working against the backdrop of gargantuan spaces!

Swiss-type single or double spindle machines (or sliding head) › These lathes, unlike those of the previous category, satisfy a wider market due to the use of numerical control. Swiss by  name, and Swiss by nature, they are perfectly apt for applications demanding precise, small-sized pieces in numerically limited series. The ability to use CNC makes these machines extremely flexible and capable of producing more complex parts. The sliding heads are, in any case, suitable for machining components with small diameters, of less than 40 mm, in particular those with lengths significantly greater than their diameters.
These are machines with several axes that allow the simultaneous processing of the front and rear faces of the piece, as well as the use of different live-tools.
The bar, set into rotation by a spindle, is pushed inside a guide bush. The axial movement of the spindle acts as the z axis in the machine, and the tools remain close to the guide bush, ensuring machining stability for small diameter to length ratio pieces. The use of the pick-up counter-spindle also allows you to work the complete piece on both sides.
Limitations › When working from bar stock, the limits you have to deal with are those common to all machines that work from bar stock, as we will see later on, when we talk about such issues.
The limits of a sliding head mainly relate to the maximum diameter of usable bar, which, in turn, thus limits its field of application. The production capacity of this type of machine is low, as processes are carried out in series, making it unsuitable for high-volume usage, when exceeding an average of tens of thousands of pieces. In addition, due to its compact size, the space for adjusting and changing tools is limited, resulting in a long set-up time.

Single & double-spindle machines with vertical spindles › I would like to point out that, in this overview, we are missing an analysis of traditional vertical lathes, with spindle noses facing upwards. These are applications particularly suitable for machining large and very large pieces, such as in energy production or aerospace sectors, where the diameters of the machined pieces can easily range up to 5-to-6 meters with significant lengths as well. On the other hand, inverted vertical lathes with spindle heads facing downwards, have found a rather wide field of application, such as the machining of pieces with length to diameter ratios of less than 1, and typical flanges of various diameters, including greater than 200-300 mm.
Limitations › These machines are only suitable for niche productions, such as flanges and brake discs. So, there is a rather marked flexibility problem, not to mention that double and single spindles with inverted vertical spindles are not suitable for bar machining.
Also in this case, the vertical double spindle does not allow for the semi-finished product to be directly passed from the first to the second spindle. This results in a waste of time and precision issues when the piece has to be machined on both sides.

Multi-spindles › The multi-spindle was created for bar machining and high productivity. It consists of a structure that supports a rotating drum with a horizontal axis, with, generally, 6 or 8 rotating spindles accommodated on this drum around its rotation axis. The bars are loaded from the far side of the spindles themselves, and poke out at the front for turning. The tools are fixed on slides with radial movements, to match up with the position in which the spindle drum is oriented. The drum rotates a sixth or an eighth of a turn (depending on the number of spindles) to position the spindles in correspondence with the tool holder slides for the machining envisaged in that cycle. The work cycle is, therefore, shared between the various spindles, with the tools working in parallel, and the machining time equal to that of the slowest phase, plus the  rotation time of the spindle-holder drum, and the dead time for changing bars. Note that the bar, however, cannot be entirely machined. The last portion, that can even be as much as 200 mm, cannot be machined, as it is used to hold the bar in place, and, therefore, must be discarded. In practice, the multi-spindle works just as if it were six or eight single-spindle machines working in parallel, with each tool interacting in succession with all of the spindles present.
This type of machine can also be modified for secondary turning, with a system that loads semi-finished pieces directly into the spindles. These are machines mainly used for the production of large volumes of bar-turned parts, of fair accuracy and precision.
Limitations › The first limit relates to the complexity of the tooling and consequent lack of flexibility, demanding highly specialized labour and long set-up times, particularly unsuited to frequent production changes for small batches.
Bear in mind that, since each and every tool interacts with all the spindles, when replacing or adjusting even just one of them, you need to stop the whole machine, and check all the work performed in succession by all spindles before restarting production.
In general, all the spindles rotate at the same speed, which is, therefore, not independently settable for each spindle based on the optimal working parameter for that phase. This aspect is a technological limitation that must be taken into consideration, because it affects both the lifespan of the tools and the quality of the finished product, especially when more demanding materials have to be processed.
Therefore, both tooling issues and limits arise due to the fact that several bars must be rotated at the same time and at the same speed. On a practical level, this means dealing with the usual bar issues multiplied by the actual number of bars used. As I mentioned earlier, multi-spindles can also perform secondary turning, but require more complex and cumbersome feed systems, due to the difficulty in accessing the feed and work areas.

Transfer machines › Here we have an insider! I thought I would include it in this round-up, simply because it is such a frequently used machine. That said, the transfer machine, unlike all the others on the list, is not a lathe.
However, it is used - and this is why I am including it in this section - in some specific cases in order to process bar-obtained pieces. Most of the processing carried out by the transfer machine takes place on a fixed, that is non-rotating, piece, which means that this type of machinery cannot produce turned pieces.
Furthermore, the precision and degree of finishing of the work are quite poor.
Why is it used then? The basic reason is that transfer machines can provide high productivity levels. This is because the work cycle can be divided between several stations and several tool holder units arranged radially around a central body. This central body rotates the clamped pieces between successive work stations that work in parallel. Therefore, it is a concept similar to the multi-spindle set-up, with the difference that multi-spindles rotate the bars, while transfer machines rotate the tools. Just like multi-spindles, transfer machines are suitable for high production volumes, but are improperly used in some cases to machine bar or, in any case, axial-symmetrical workpieces.
Limitations › Transfer machines are suitable for large volume productions, but, similarly to multi-spindles, tooling is complex, demanding long set-up times and high costs, due to the complexity of the equipment and the number of special tools that need to be used.
The achievable levels of precision are not high, especially for axial-symmetrical workpieces, which then need to be turned in order to obtain good surface finishing and low dimensional and geometrical tolerances.
Furthermore, the very architecture of the transfer machines does not facilitate the handling and evacuation of the long chips produced when processing materials such as coldpressed steel, lead-free brass or similar. 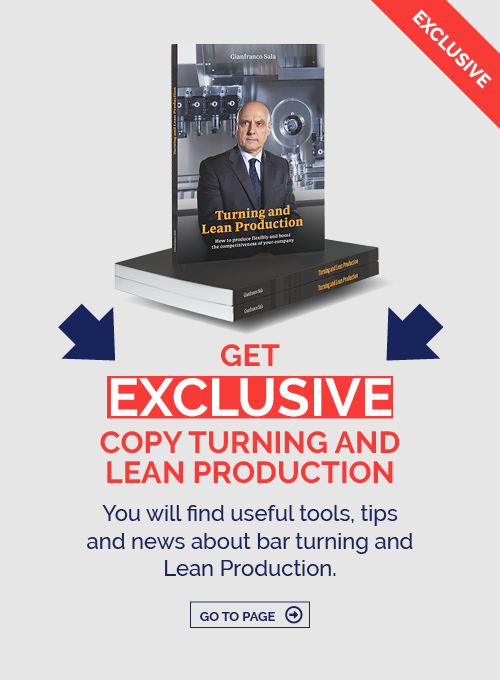